Bald eagles transform their lives at 40! - Fact or Fiction

Myth or Fact: Bald eagles go through a process of transformation at 40. They take a life changing decision in which the bald eagle breaks off it's beak and rips off it's feathers. And then waits for them to grow back. This painful procedure takes a good 5 months but it extends an eagle's life from 30years to an amazing 70years! 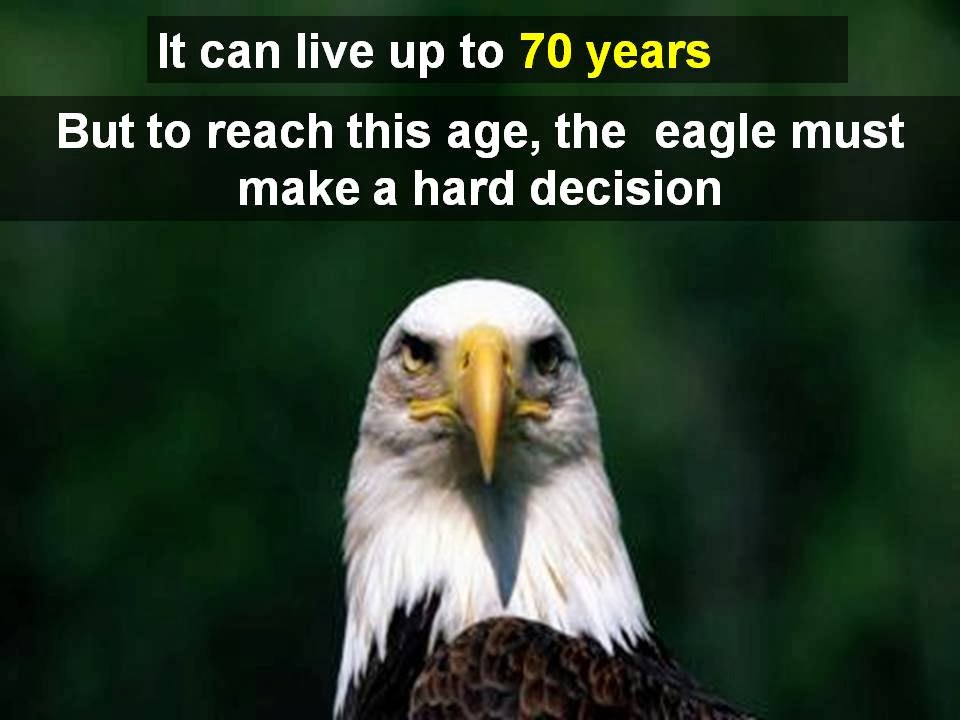 
For almost half a decade this has been a topic of debates and discussion. People have argued for and against it without having concrete proofs. So here are a few proofs that we have collected and hopefully they will help you decide for yourself.

Majority people and mostly the not-so-good observers consider this whole thing to be a simple rumor. According to them, it all began when a few motivational speakers came up with an idea to use this Bald eagle's popularity and supremacy and transform it into something more. They created power-point presentations and slides mainly for the objective on inspiring people in their lectures since people tend to get motivated more from nature. However not long after, these slides became viral over the Internet. People started liking and sharing these slides and it became a topic of widespread discussion. After all the idea of shedding old feathers and growing new ones looks amazing!

Below is one of the slides that became viral showing the transformation of eagles.


"We have received quite a few e-mails regarding the "Eagle Rebirth" story recently. The story is quite far from what an eagle's life truly consists of, but we would be happy to share with you the natural history of the Bald Eagle. Eagles would not typically "lose" their beak or talons, unless it was the result of a traumatic injury. The talons and beak are two of the three best defining features of what makes these birds "raptors". Without the sharp talons for catching prey and the strong, sharp beak for tearing food, the raptor would certainly die of starvation. An eagle hatches with both a beak and talons and these will continue to grow throughout the bird's life. The beak and talons are composed of hard
keratin and are somewhat similar to human fingernails. The talons of the eagle are not flexible as the story claims. New layers of keratin growth build onto the old layers ensuring a strong structure for the raptor. The raptor keeps the beak in good condition naturally in the wild by eating tough prey and rubbing the beak clean on stones or other hard surfaces (feaking) after eating.

Eagles and other raptors generally do not pluck out their feathers. All birds, including raptors, do go through a process of losing feathers and this is called a molt. A bird's feathers do suffer regular wear and tear so, ultimately, the quality of the feather will decrease and it will need to be replaced. The feathers are not lost all at the same time. If this were true, the bird would be unprotected from natural elements and more importantly it would not be able to fly. Eagles and all other raptors need to fly in order to hunt and survive so the loss of flight would most likely mean starvation for the bird. Each feather comes from a feather follicle much like hair does on a mammal. When the feather is first emerging and developing it has a blood supply coming from the body going up into the shaft of the feather. If this feather is broken or pulled out it is not only very painful for the bird, but could result in blood loss and damage to the feather follicle. Severe damage to the feather follicle could result in the permanent loss of the follicle. If a feather is lost before a molt it could take up to a year to be replaced. Raptors and all other birds molt in a symmetrical pattern. If a primary feather is molted on the left wing, the same feather is molted simultaneously on the right wing. This can ensure balance in flight for the bird while it hunts during this molting period.


The average life span of an eagle is approximately 30 years. The eagle, like many other living organisms, does not have the luxury of making the decision to extend their life cycle far beyond what is normal for its species. In captivity, an eagle may live beyond what the average life expectancy is, because it receives both regular and nutritious meals, has access to veterinary care and can be sheltered from the harsh elements by housing provided by the facility caring for the bird. Even then, the life span is in no way extended as far as this myth is suggesting.

There is speculation as to the origin of this myth, but we can assure you that none of it is true."


Further detailed analysis of this slides reveals a few weak points and possibly mistakes.According to the story, to be "reborn" at forty, the eagle must retreat to its nest on a mountain top, first knock off and then regrow its beak, then pluck out and regrow its talons and, finally, pluck out and regrow its feathers, a process that takes 150 days. Thus renewed, the eagle can take its "flight of rebirth" and go on to live another thirty year.

Secondly scientists have studied eagles of various species for generations and much has been published about them, no credible sources back up the "eagle rebirth" story in any way. There are, however, plenty of reliable sources that dismiss the story as a foolish hoax.

In some slides, the eagle shown in the photographs is a Bald Eagle, but in others a different species, the Golden Eagle, is shown. The story also sprouts the scientifically meaningless claim that "the eagle has the longest life-span of its species". The author perhaps meant to say that eagles live longer than all other kinds of birds, but this is also incorrect. Parrots and other species of birds are known to live longer than eagles.


And the most oblivious flaw is as clear as it gets.How can an eagle survive 5 months without hunting for food and water?

No. Obviously the world can't believe something which is purely a lie. There are a few points which make us ponder over the possibility of all of this being true. Although few but they are pretty impactful and hence can't be simply ignored.


First the authors who claim to have spread this news say that an eagle requires very minimal amount of food during those 5 months of transformation since all it does is to sit on the very exact spot all day long. Hence even food as small as few mice can make eagle survive such a long amount of time.

Possible? Yes, given the fact that the eagle's actions are restricted its all possible scientifically.


Secondly the last 40 years have been good for the Bald Eagle. Back in 1967 it was one of the first North American birds to be put on the 'Endangered Species' list. Its classification has been relaxed to threatened, and to its present status of protected. Along with this its life expectancy has grown and in some cases eagles have grown to be over 70years although rare. Can these eagles have taken the flight of rebirth?

Be it a hoax or a fact, but we as humans have a lot of things to learn from this flight. We need to be in a process of constant change and adaptation in order to succeed in life. 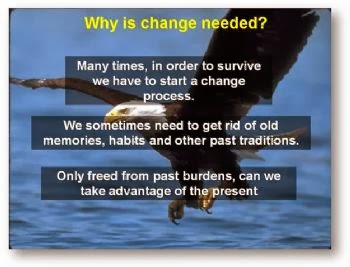